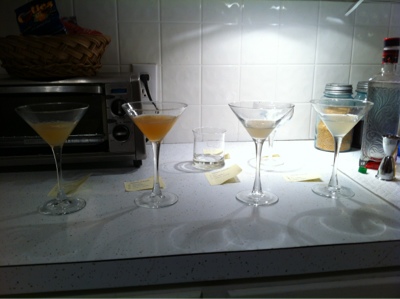 I have taken a break on revisions lately to do some more research -- more on that later.  But as part of this, I decided to try out some 1920s drinks and figure out a favorite drink for my main character, Ruby.  In my rough drafts I have her ordering gin and tonics all the time, but I knew I wanted her to be drinking something with a little more pizzazz.

Thanks to a brief reference in a TV show my husband and I have been watching a lot of -- Castle -- I picked up on the idea of a sidecar.  I did some research and the sidecar was invented in Paris during WWI, and was apparently a popular drink during the 1920s.  The drink was traditionally made with one-third cognac, one-third Cointreau, and one-third lemon juice -- but pages I found claim that the traditional recipe would be too sweet or too sour (too something, anyway, since I didn't really think it was necessarily sweet, just lemony) for modern tastes.  Modern recipes have the drink being half or nearly half cognac.

I figured that as easy as gin was to get during Prohibition -- "bathtub gin" being common -- there had to be a gin version, and a little more research pulled up the Chelsea sidecar.  The gin sidecar appears to have a number of other names, but a lot of the recipes I've found under these names -- such as the white lady -- call for egg white, which I personally find disgusting, so I went with the Chelsea sidecar, which doesn't seem to call for any egg white.  I also found a 1936 cocktail recipe book that calls it the white horse.

Anyway, Michael and I went shopping for some ingredients, and last night we tried out the sidecar in all its varieties: from left to right, the original (cognac) sidecar in traditional proportions of thirds (in front of the toaster), a more modern recipe, a gin (or Chelsea) sidecar in thirds, and the same with the more modern proportions.

As you can see in the picture, the Chelsea sidecar with the traditional thirds of everything was the one I liked the best.  The gin is very unassuming and easy to drink.  The traditional sidecar (with cognac and thirds) was a close second, as the cognac has a warmer, richer flavor that makes it taste stronger, but also more interesting in some ways.  I definitely liked the thirds recipes the best -- the modern recipe with cognac I didn't really like at all (too strong), while the more modern recipe with gin just tasted like any other modern drink -- having equal proportions of Cointreau and lemon juice made it more unique.

We also tried a gimlet, and an orange blossom without the vermouth, both of which weren't as good as the sidecar.  The orange blossom -- which was half gin, half orange juice -- was better, and probably would have been pretty decent if it were made with a thicker type of orange juice, such as Simply Orange.  (We made it with Tropicana, what the liquor store sold, which is pretty watery in comparison to the Simply Orange brand, and therefore didn't have as much flavor to balance the gin.)  The gimlet was pretty much a failure -- we tried it with various amounts of gin versus Rose's lime juice, but it wasn't much help until the ice started to melt and dilute the drink.  I did see a recipe for a similar drink, made with gin, Rose's lime juice, and tonic water or club soda, and I can definitely see the appeal of diluting it with the third ingredient!

I want to do some more research sometime and try out a few other drinks from the 1920s, such as gin rickeys (gin and club soda, mentioned in The Great Gatsby), just so that I have more experience with the common drinks of the era -- but I have successfully found a favorite drink for Ruby in the Chelsea sidecar.  It's both fun and sophisticated, and would be fairly easy to find the ingredients for, since gin was so common.  The traditional sidecar -- made with cognac -- will be something she orders when cognac is more readily available, which I am guessing it wasn't always, particularly in the less classy clubs -- and in any case, certainly not as cheap as the same drink made with gin.

Definitely some of the most fun and interesting research I've done!
Posted by Katharine Swan at 10:49 PM