This weekend I went to my first Anomaly Con, a steampunk, sci-fi, and fantasy convention that's in its third year here in Denver.  I had a blast, dressing up in costumes and attending presentations and workshops for writers.  Yesterday, my third day at the convention, I dressed up in 1920s garb, even though it's not strictly steampunk. 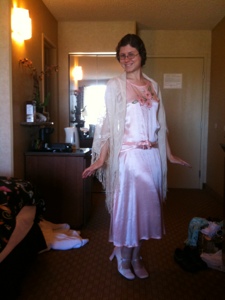 I even found a tiny metal toy pistol, probably from the 1960s or 1970s, for sale in the dealer room -- but unfortunately I couldn't carry it with me because it was too realistic.  Next year I think I'll find and paint a plastic squirt gun and make a garter holster, so that I can be Ruby all the way.  I may look into a temporary red hair dye as well. 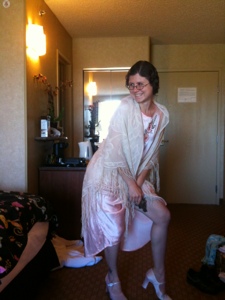 I got some compliments on the outfit, although Sunday was a much quieter day for the conference, it being Easter.  I thought it looked great, though, not to mention it was a lot of fun to wear.  The dress was actually from the 1920s, although I might not do that again because it was more fragile than I was expecting, and did get a little damaged.  The problem is that authentic 1920s costumes are hard to come by -- the stereotypical costume is too heavy on the fringe and far too short to truly be 20s.

I came away from the conference with lots of great ideas, both for writing and for business.  There were many panels and presentations that talked about publishing, marketing, and the business of writing, and I attended as many of those as I could.  A lot of the information was stuff I already knew, because of my background as a freelancer, but I believe there is always something new to learn!  I also got some really good ideas, thanks to the writing prompts in a couple of workshops that my friends attended (though I for the most part did not attend any), for a few short stories that take place in Ruby's world.

It was an exhausting, fun, and thoroughly inspiring weekend.  I'd taken a break from revisions to read some old vampire literature, but now I'm more than ready to get back to work!
Posted by Katharine Swan at 11:56 AM