An ending and finalizing the timeline

This is two weeks overdue, but I updated the progress meter in the sidebar with the most recent word count.  I put an ending on the novel two weeks ago today, which is HUGE news.  I wrote 3,400 words that day -- almost 2,000 at a NaNoWriMo-style write-in I attended with a friend, and then when I got home I just kept going until I reached the end.  I knew I was close, and didn't want to leave it undone at that point.  So I finished it.

The word count is a little shy of my 100,000-word goal, but I do need to go back in and write the missing chapter still.  I think that's the only significant addition, though, unlike the first novel (which needs a lot more work, in my opinion, to make it complete and to tie it into the historical context a little better).  I also think I tied up all the loose ends pretty well in the conclusion of this novel.

I took a break after putting the ending on the novel, and the break ended up going a little longer than I'd intended.  I'd thought a few days, but before I knew it, last week was almost over and I still hadn't gotten back to work.  Then I planned on getting back to work on Monday, and that didn't happen, either.  In my defense, though, I have been reading a book on Capone that I got as research a little while back, so I suppose that means the time wasn't wholly wasted.

I finally started work on it again last night, when I started finalizing the timeline.  This is something that has been nagging at me for some time: I need to place the fictional events in the series, in the first novel especially, so that I have a context for what is going on with the mob at the same time.  The first novel takes place in 1923, and there was a lot going on with the mob that year and the next year, when the most recently completed novel takes place.

In other words, there is a lot of big picture that I am having a hard time keeping in mind while I write.  To help me put dates on the fictional events and keep the big picture in mind, I took down all of the character images I had pinned upon the bulletin board on my desk, and replaced them with mini note cards.  Now my bulletin board is almost a solid wall of white cards (somewhat intimidating!) with events (both fictional and real) and dates.  Somehow I managed to get both novels up there, and even left a little space in the middle for the novella (though that area is currently -- and temporarily, I hope -- partially occupied by a couple of sticky notes).  I am hoping that, as I write and revise, having the cards up there will help me to keep in mind the big picture of what was happening at the time, as well as what had already happened and what was still to come. 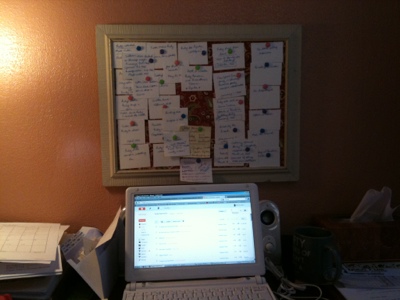 Posted by Katharine Swan at 1:37 PM

Email ThisBlogThis!Share to TwitterShare to FacebookShare to Pinterest
Labels: research and preparation