One of the things I've always been most fascinated with about the 1920s is the increase in the availability of work for women.  Women had been slowly gaining grounds in business jobs such as working as secretaries and typists for a couple of decades, and the 1920s saw a lot of independent young women - which, of course, contributed to the amount of freedom they had to go out partying.

Companies such as Sears - where Ruby works - were huge employers of women typists.  Young women went to typing schools to learn to type, and when they went to work, they would work in a room filled with dozens of women, all typing away at rows of desks.  It was pretty monotonous as far as work goes: rigid work times and breaks, strict rules about talking during work hours, and close supervision under a manager on high.  It was an era when the concepts of Taylorism were taking hold in office work as well as factory settings.

Most young women, when they went to typing school in the 1920s, probably aspired to be secretaries and typists in private offices, where they would perform a variety of tasks and enjoy better pay than what companies like Sears paid them.  The work at Sears had to be repetitive as well, since Taylorism encouraged an assembly line-like approach to all things.  Rather than typing up interesting correspondence for the boss in a private office, for instance, typists at Sears typed up orders at a time when the company was primarily mail order. 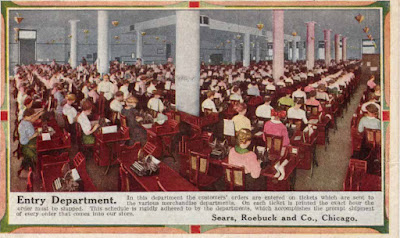 But working at Sears was also not a bad job, even if you had to have roommates to get by.  Sears was like modern day "millennial" employers, offering employee culture and benefits as incentive.  The Sears complex was a city unto itself, with cafeterias for the employees, a library on-site with the ability to send out for books from the public library as well, and company picnics and sports teams.  It even had its own station on the L, so that carless young women could get to work from all over town.  Above all, it was a reliable paycheck for young women who wanted a taste of independence before they got married.

Ultimately, not all that much had changed for young women's expected paths.  It was still expected that the young women who worked for places like Sears would eventually get married, and once married, would give up their jobs to be homemakers and mothers, leaving the paycheck for other single young women in need.  Working young women in the 1920s dated a lot, trying to find that special someone, but also because their paychecks typically didn't support the cost of going out, even when they had roommates - dating often fed them and provided entertainment that they wouldn't have been able to afford otherwise.

It wasn't a perfect setup, but it was progress.  Working and a certain amount of financial independence was becoming more acceptable for single young women.

This is the era where Ruby's story starts.