Who Is Ruby, Anyway? 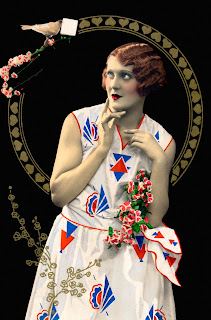 I've written a lot about the 1920s on this blog, but you may be wondering who this Ruby Ransome is, anyway.  Ruby is a modern young woman with a past who gets sucked into the world of vampires in the 1920s.

Ruby works as a typist at Sears by day, drinking and partying in speakeasies with her friends at night.  She and her roommate Genevieve are pursuing their dreams in 1920s Chicago: Ruby of achieving independence and professionalism through her career, Vee of making it as a nightclub singer.  Ruby has a past, though, one that has influenced her life choices and will come to light over the course of the series.

Unbeknownst to her, 1920s Chicago is a den of vampire activity, with the mob as a front.  Nightclubs allow vampires to feed without suspicion, while to corrupt politicians, even literal blood money is valid currency.  This is the world Ruby becomes aware of, unwillingly at first, and then willingly as she agrees to join forces with an ancient vampire to fight the evil hold on her city.

Ruby's story starts in 1923, which will be exactly 100 years from next year.  I'm hoping to finally get her first book completed and published next year, as telling her story exactly a century later seems like poetic justice.