Where NaNoWriMo got me

NaNoWriMo is over, and I failed to post to my blog even once during the entire month.  I wish I could say that it was because I was so busy writing my novel that I didn't have time to write anything else... but that wouldn't be true.  I was busy, and I was writing my novel, but the two were unrelated.  As a result, I only got about halfway through my target word count for the month (25k instead of 50k). 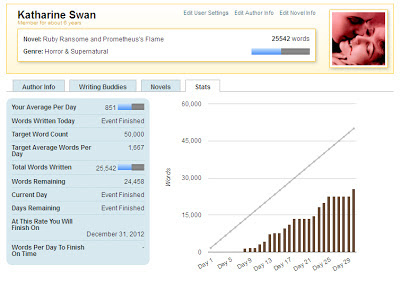 I don't consider it a total failure, though.  I may not have a winner's certificate, and I didn't finish the novel yet (this being the novel of which I wrote the first half in August, during Camp NaNoWriMo), but I'm 25k closer.  I think I'll actually have an ending in another 10 or 15k.

But more importantly, I filled in some huge plot holes that were nagging at me, and completed some important research.  I also realized several things about the series, and that is that this book is not really Prometheus's Flame.  That is the second book, or rather a novella occurring after Pandora's Box and before this book.  I have an idea for a title for this one, but haven't finalized it yet, so for now it will have to remain a mystery.

My goal for December is to finish the current book (now Book 3, as I'm going to count the novella as its own book).  Once that's done, I'll let it sit and germinate while I perform the rewrites and the new-writes (scenes I need to add that got overlooked the first time around) on the first book.  As you may remember, I had done a round of simple revisions over the summer, but I'd left the hard stuff -- the scenes that needed to be totally rewritten, and the things I realized I'd completely left out -- for later.

Hopefully I will be able to maintain a steady enough pace without NaNoWriMo to keep me motivated (not that it succeeded so well at that this past session).  I have some writing friends I meet with regularly, including a few new ones that I made during NaNoWriMo this year, so hopefully I'll be able to maintain enough of a writing atmosphere to help with the motivation!
Posted by Katharine Swan at 12:29 PM

Email ThisBlogThis!Share to TwitterShare to FacebookShare to Pinterest
Labels: NaNoWriMo 2012